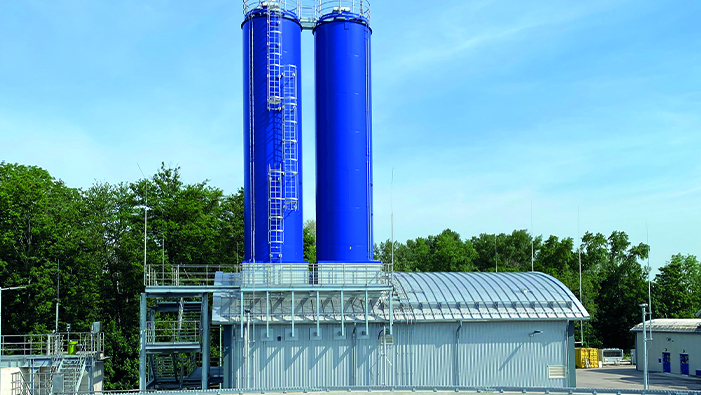 The second largest sewage treatment plant in Baden-Württemberg has now been expanded to include an additional 4th treatment stage, activated carbon adsorption for the elimination of micro-pollutants. With its help, so-called micro-pollutants and trace substances are removed from the wastewater. These include drug residues, hormones, X-ray contrast media and similar substances. The sewage treatment plant in Karlsruhe discharges the treated wastewater of about 850,000 population equivalents (total pollutant load) into the Rhine. Approximately 35 million m³ of wastewater are treated each year. SÜLZLE KOPF has made a significant contribution to improving the purification performance of the Karlsruhe sewage treatment plant. Our order included the delivery, installation and commissioning of two identical powder activated carbon (PAH) storage and dosing systems (AK-DOS©). Further components are the pressure boosting station and the compressed air generation.

The AK-DOS© plant essentially consists of:

The PAH plant was equipped electrotechnically for fully automatic operation. Trial operation and commissioning took place in July 2022. The completion of the 4th treatment stage is an important step towards ensuring that the legally prescribed limit values can be safely complied with in the future. The 4th treatment stage also means a great relief for the flora and fauna in the downstream rivers.